The travel from Palompon to KALANGGAMAN ISLAND took about an hour. We left Palompon at 6:30AM and arrived in our destination at around 7:30AM.

We rented a cottage near the sandbar, which was less busier and noisier plus we had a great view while resting and eating.

Our first local trip together – me and my best friend, K! Our main mission was to visit Kalanggaman Island in Leyte… so we first took a plane going to Tacloban. Then from Tacloban, we rode a van for 4 hours to get to Palompon.

Palompon is a small town and less urban than Tacloban so there are only a few restaurants to choose from as well as small groceries. Initially we booked our accommodation via Airbnb but Diana, the host, told me to directly transact with her instead so that we could get a room instead of the whole house. I think this one is an updated link and it looks very similar to the room we stayed in: https://www.airbnb.com/rooms/13145062?s=51.

We were welcomed by the host’s mom and we were happy to see that the room had aircon because the weather was hot at that time.

Next day, we got up early to go to Palompon Eco-Tourism Office and rent a boat.

IMPORTANT NOTE: You need to reserve ahead of time because there is a limit to the number of tourists they allow to visit in a day. In this way, they prevent the island from being abused by a large wave of people. Check out this link for more details: http://kalanggaman-island.com/kalanggaman-rates-and-entrance-fee.html

We rented a boat for us two, which costs Php 3,000.00. Share per person would definitely be cheaper for a large group. There is an option to join another group so that the cost per pax would be lower but the time we want to go back to Palompon is different so we had to rent our own.

The travel from Palompon to KALANGGAMAN ISLAND took about an hour. We left Palompon at 6:30AM and arrived in our destination at around 7:30AM. 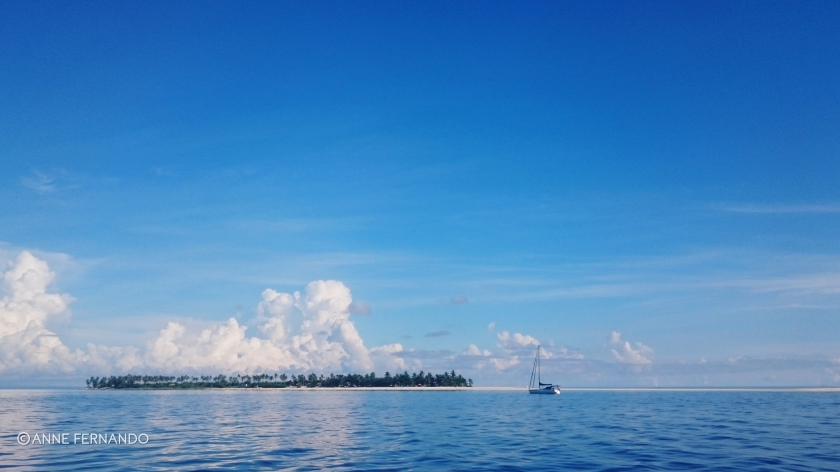 We rented a cottage near the sandbar, which was less busier and noisier plus we had a great view while resting and eating. 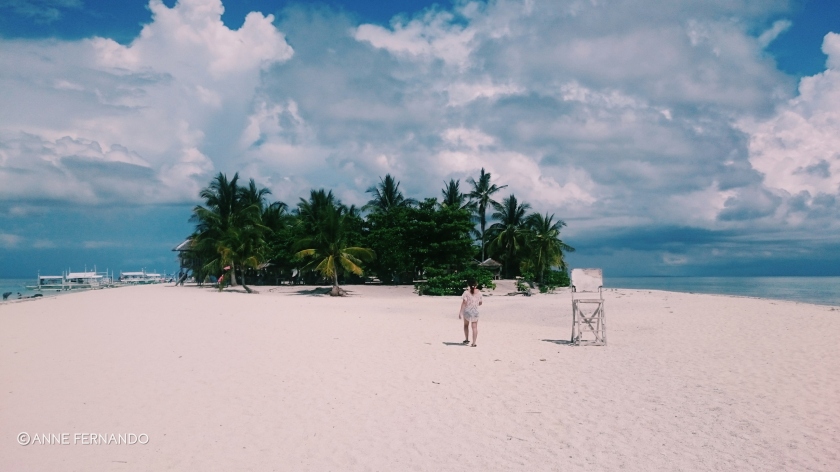 It was still low tide so we explored first the sandbar while there was still sand to walk on. There is a warning board there not to swim during high tide because of riptides.

After walking around, we went back to the main area where people were swimming.

The place was really beautiful to look at – different shades of blue for the sea and white sand everywhere. The only thing we were disappointed was that we read in a lot of blogs (and even in the office) that snorkeling is a recommended activity. We snorkeled for about an hour but we only saw less than 5 small fish. The rest was just people and floating seaweed. ☹ 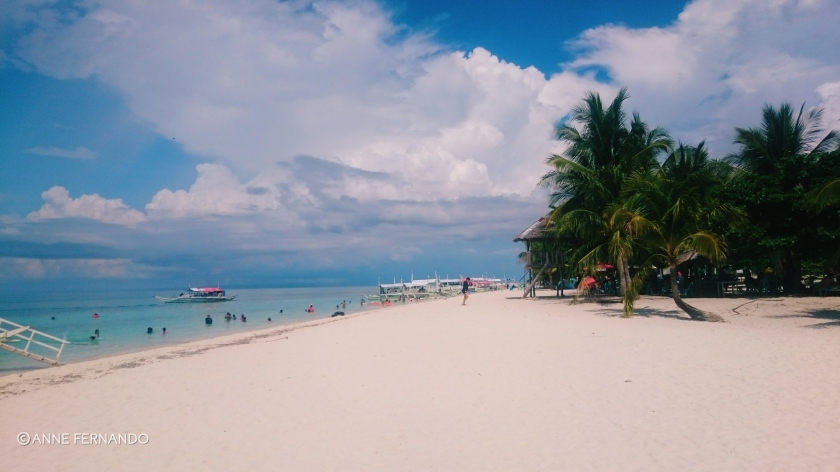 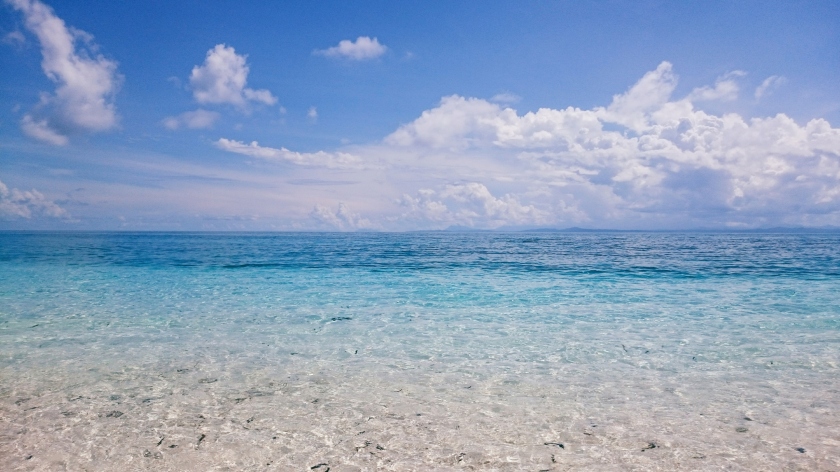 We went back to our cottage to eat early lunch but decided to go back to the sandbar because the outer edge was already submerged in water. 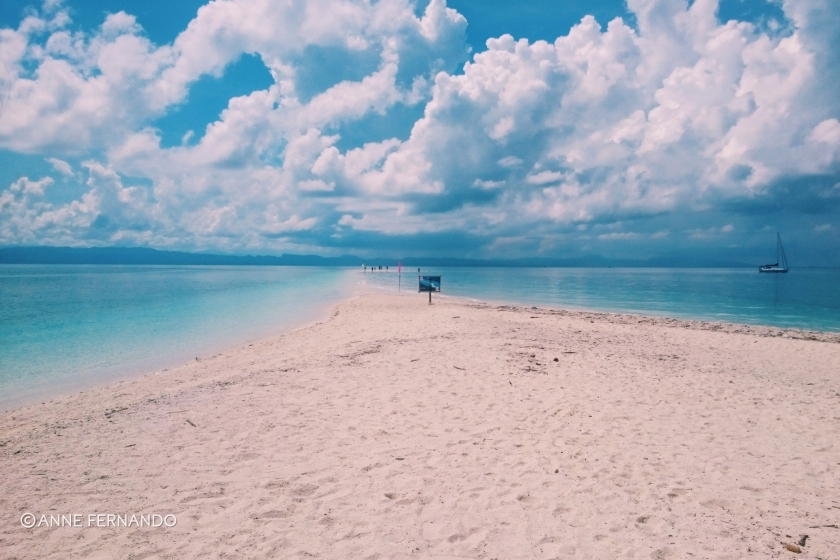 We didn’t go to the outer edge though because we were scared to get pulled by a riptide. We only walked a few meters then ran back to dry sand. Haha! 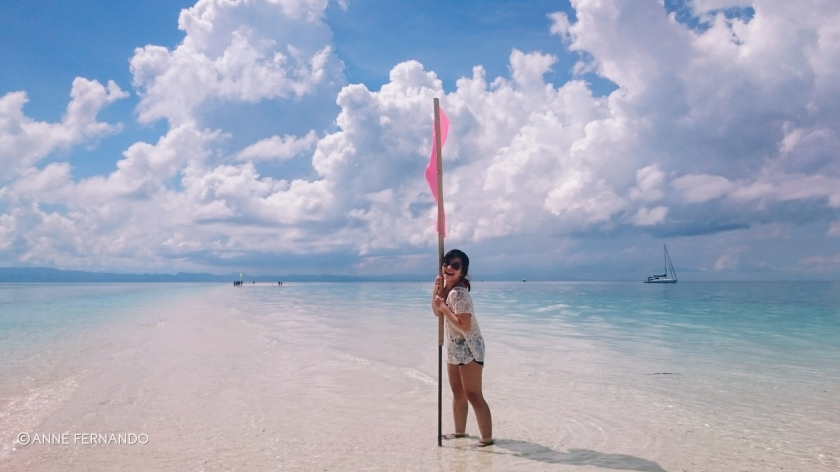 Admired these sceneries while eating our lunch… 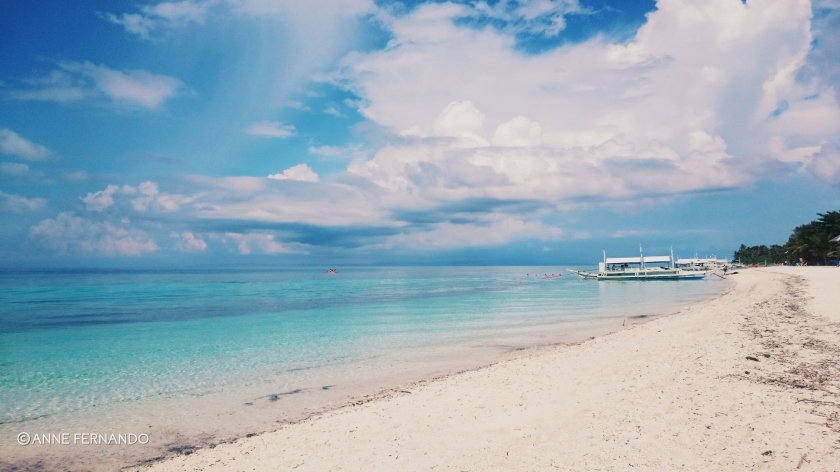 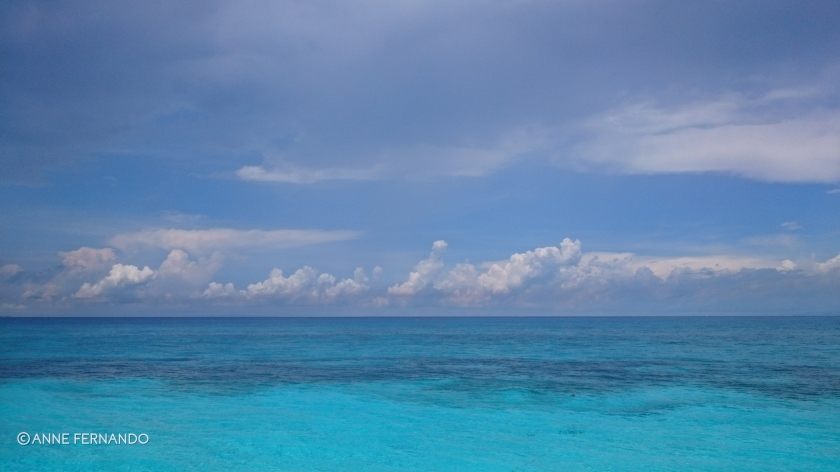 The morning didn’t end well though because while we were eating chocolates for desserts we saw a lot of people going to the sandbar area to swim even if there was a large board already warning people not to. A few minutes later, I called K’s attention because I thought I spotted someone flailing in the middle of the sea… true enough, it was a middle-aged man who got pulled by the riptide.

Rescue team went to save him immediately… everything happened fast because we couldn’t see the guy anymore and 3-4 rescue persons dived into the sea. They got the guy and tried to revive him for a long time. He was eventually taken to a boat to ride back to Palompon while CPR was being continued.

I heard locals muttering that the tourism would be affected especially if the issue would be in nationwide news… all because of not following warning signs. Some blamed the guy, some blamed the staff in the island for not having a life guard stationed near the sandbar. But bottom line is, can’t we just follow instructions and warnings because these wouldn’t be there if there is no harm or danger that would possibly befall you.

My HS friends and I saw the same thing in Magalawa Island (Zambales) – people were swimming in the sandbar area even if there was a huge sign saying not to because of riptide or strong undercurrents. Thankfully at that time, no one got hurt. 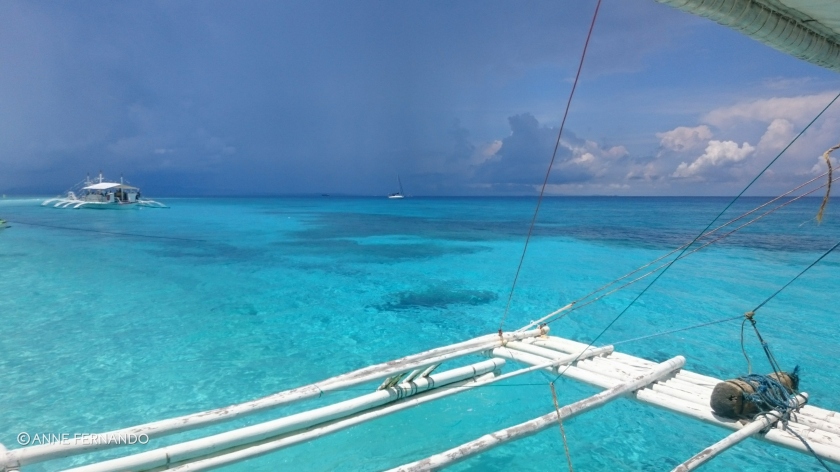 We headed back to Palompon after the incident, 3-4 hours earlier than our intended departure from the island. We just stayed in our lodging and watched Running Man to keep our boredom at bay.

The next day, we left early in the morning so that we can have lunch in Tacloban. Tricycle drivers in the van terminal tried to rip us off by charging us Php 150 going to Ocho Seafood and Grill. The last one I just had to answer back that their rate was way more expensive than a taxi so he explained that he would have to pass by small streets to get us to the place otherwise we would have to walk about 5 minutes from the drop off. We told him it was fine so we were only charged Php 50 for the trip. Whew.

No pictures of our lunch in OCHO SEAFOOD AND GRILL but it was such a joy because we finally got to eat really delicious food + everything we had was fresh seafood. It is like dampa style because you get to choose raw seafood then ask them to cook it the way you want it. Highly recommend the place although it gets full even during weekday lunch time.

Our last stop before going to airport was JOSE KARLOS COFFEE where we had hot tea and desserts while watching another episode of Running Man. We went to the airport by riding a jeepney because there was no other option unless you rented a car to go there.

Conclusion after this trip – Cambodia is still the best trip we had together. There were other annoying incidents in this Leyte trip which I choose not to share anymore because it might just be a case of bad luck as others seemed to have enjoyed their time in Leyte.