Not going to leave Kumamoto without seeing the Monkey D. Luffy (One Piece). Eiichiro Oda, the creator of One Piece, grew up in Kumamoto and donated a huge amount of money after the devastating earthquake in 2016.

Not going to leave Kumamoto without seeing the MONKEY D. LUFFY STATUE (One Piece). Eiichiro Oda, the creator of One Piece, grew up in Kumamoto and donated a huge amount of money after the devastating earthquake in 2016. To commemorate his generous act, the Kumamoto government decided to build statues of the Strawhat crew in different locations in Kumamoto.

We went to KUMAMOTO CASTLE afterwards but we only saw the outside. The castle suffered serious damage from the 2016 earthquake and reconstruction is still ongoing.

For lunch, we went to MATSUYA and ordered gyumeshi. But our curiosity was piqued with the cheese hamburg so we also got this but for sharing. Sooo good! Even better than the gyumeshi.

I was really looking forward to wearing a kimono since that is part of my bucket list. Despite previous trips in Japan, it was not a top of mind activity due to the extreme cold weather (winter and early spring).

One of the popular kimono rental shops in Kyoto is wargo and I chose their branch in Gion as they have a bigger selection of kimono designs and it was the area where I wanted to go around while in kimono. 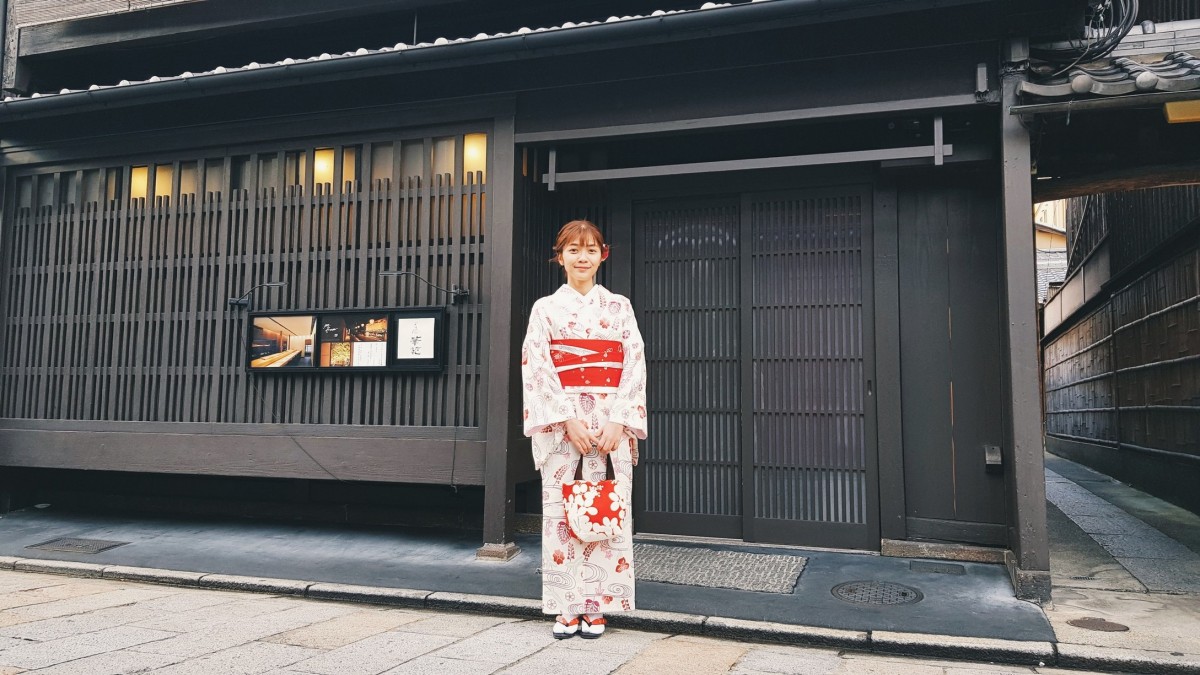 So as I mentioned in my previous post, I was really looking forward to wearing a kimono since that is part of my bucket list. Despite previous trips in Japan, it was not a top of mind activity due to the extreme cold weather (winter and early spring).

One of the popular kimono rental shops in Kyoto is wargo and I chose their branch in Gion as they have a bigger selection of kimono designs and it was the area where I wanted to go around while in kimono.

I got the standard kimono plan and paid an additional fee for basic hairdo + curling of fringe/bangs.  I made an online reservation so I got everything cheaper than doing it walk-in. But more than the lower cost, online reservation secured me a sure time slot for wearing the kimono. There was no time limit as long as I returned the kimono by 18:30.

It took me some time to decide which kimono to wear because they had a lot of designs that I liked. Eventually I settled for a design that had a prominent red color to match the autumn season. I was also torn between two obi (sash) so I asked for the staff’s reco which one best matched the kimono I chose.

After choosing, I was told to sit in one of the chairs and they handed me a chart which showed the options for basic hairdo. I pointed to the one I liked and the hairstylist proceeded to do her magic – she was done in less than 10 minutes! Including curling my side fringes… how was that even possible?

I went to the dressing room afterwards and got assigned to Noriko-san. The whole process of wearing the kimono was complex. There were a lot of layers to put on so even if I only had one thermal top, Noriko-san assured me that I would not get cold. At one point though during the fitting, her knot was too tight so I was racking my brains for the Japanese translation… I couldn’t think of it so I just said “Sumimasen… too tight.” Good thing she understood so she loosened the knot a bit. After Noriko-san’s magic with my kimono, I placed my important stuff in the small bag I chose then selected a pair of slippers that would match my look.

TIP: Choose a pair of slippers that is either the exact same size as your foot or one size smaller, whichever you will be more comfortable in walking.

Once dressing was complete, the hairstylist told me to pick a kanzashi (hair ornament). I was so confused which to choose because everything looked nice so I asked her to pick for me. She chose two kanzashi and I decided on the one with pink and red flowers.

It was time to go out and I chose the side of GION nearest to wargo. There was a shrine nearby with other people in kimono too so it felt like I was in another era. What else to do here but take pictures. 😊

It was almost sunset so the golden light effect was really nice. Still can’t believe that I looked like this with the magic hands and skills of wargo staff!

After going around, I remembered the Gion area I visited back in 2017 – the one near Gion-Shirakawa and Tatsumi Bridge (read it here). I had to thank my memory and cognitive map because I was able to reach it without getting lost. Yay!

These two shots from the area are definitely my favorite:

I can’t read the kanji writings in each part of the fence but this added to the traditional vibe of Gion.

After almost 2 hours, I went back to the rental shop and I returned to being an ordinary-looking tourist in Japan. I headed back to Kyoto Station to hop on a normal train ride going back to Nagoya – about a two-hour trip with one transfer in Maibara Station. Taking another shinkansen would make a dent on my pocket money already. LOL.

Back in Nagoya, even when it was past 9PM, my hair still looked really good! Can’t stop raving about the magic hands of that hairstylist… or maybe it’s because I’m a noob when it comes to fixing my hair. Haha!

I didn’t know where to eat dinner so I just went to the direction near our hotel that I had not yet explored.

Earlier during this day, I was chatting with my friend – J. She recommended that I try the grilled marinated beef in MATSUYA. So it was a surprise when I found out there was a Matsuya near the hotel.

I got the smallest size for the grilled marinated beef set (¥650), and ordering was a breeze with their vendo machine that had an English menu option. I only waited for a few minutes before my order was served.

I wasn’t too hungry that night though so it was a bit of a challenge to finish the serving of meat. After dinner, I got a random ice cream from the convenience store which turned out to be vanilla. Yay for a non-weird flavor!